reporting by Helen Hill for CBIOMES

Gardeners will be familiar with symbiotic relationships in the vegetable patch, for example pairing beans and corn where bean plants contribute organic nitrogen (a fertilizer) to the soil that a companion planting of corn can benefit from. In the ocean, diazotrophs, (phytoplankton that derive their energy by fixing nitrogen) take nitrogen from the atmosphere and make organic nitrogen allowing them to outcompete other phytoplankton when organic nitrogen is limiting. Diatom–diazotroph associations (DDAs),  symbioses where diazotrophs support the host diatoms with dinitrogen (N2) fixation, are a widespread marine planktonic symbiosis between several diatom genera and N2 fixing bacteria that allow diatoms to grow in nitrogen-poor conditions..

To explore how diazotrophs might support their host diatoms with dinitrogen fixation, Christopher Follett together with co-authors Keisuke Inomura, Takako Masuda, Meri Eichner, Ondřej Prášil and Curtis Deutsch, set out to quantify the reciprocal metabolic advantages of this symbiotic relationship through the development and analysis of a mechanistic model of a DDA. Their study was chosen as the cover story for the February 2020 issue of the journal Plants. 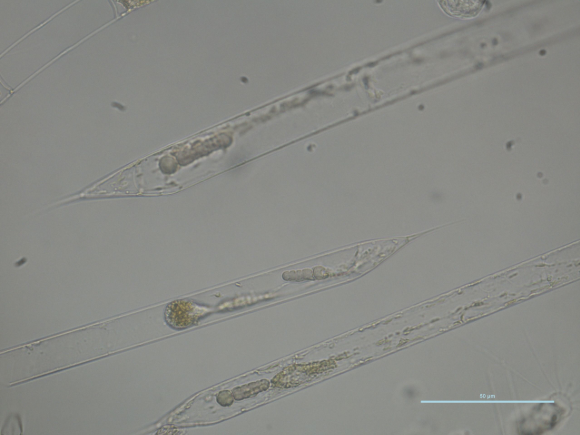 Micrograph from a 2015 SCOPE Cruise Hoe-Legacy 2. The three DDAs pictured are Rhizosolenia Richelia. The larger “pipette shaped” outer organisms are the diatom (Rhizosolenia) and the shorter chain of circular cells on the inside of each is the diazotroph (Richelia). Nitrogen fixation occurs in the largest cell (termed the heterocyst) at one end of the diazotroph chain (termed a trichome). The heterocyst is where the nitrogen fixation reactions actually occur. Both the larger cell size and a thickened wall help protect the inside from oxygen which would otherwise poison the nitrogen fixation reaction. The scale bar is 50 um.  Micrograph courtesy C. Follett.

To model the chemical and energy transfer within a DDA the team capitalized on a cell flux model (a highly idealized model of metabolic pathways in an individual cell) that Inomura had previously developed and explored in the context of nitrogen fixation as part of his doctoral research.  In such models, instead of explicitly handling thousands of individual chemicals, chemical types inside the cell are grouped into a more tractable smaller set of chemical classes (such as eg protein, carbohydrates, RNA, DNA, and lipids) and simple rules built to code the transfer of material between each class. 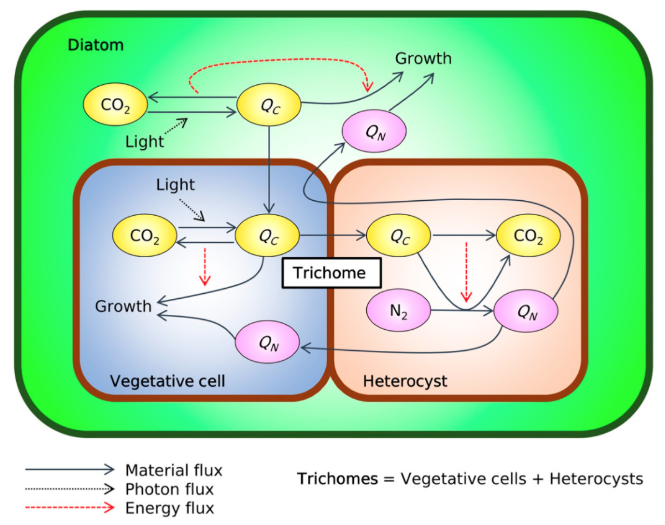 Schematic of the cell flux model of diatom–diazotroph association – from Inomura et al.

The team’s results suggest that carbon transfer from the host to the symbiont can account for the enhanced growth rate of DDA’s when compared with non-symbiotic forms while also demonstrating it is possible to build a simplified, intermediate scale, model based on cell size and composition of symbiotic nitrogen fixers.

To find out more about this work contact Chris